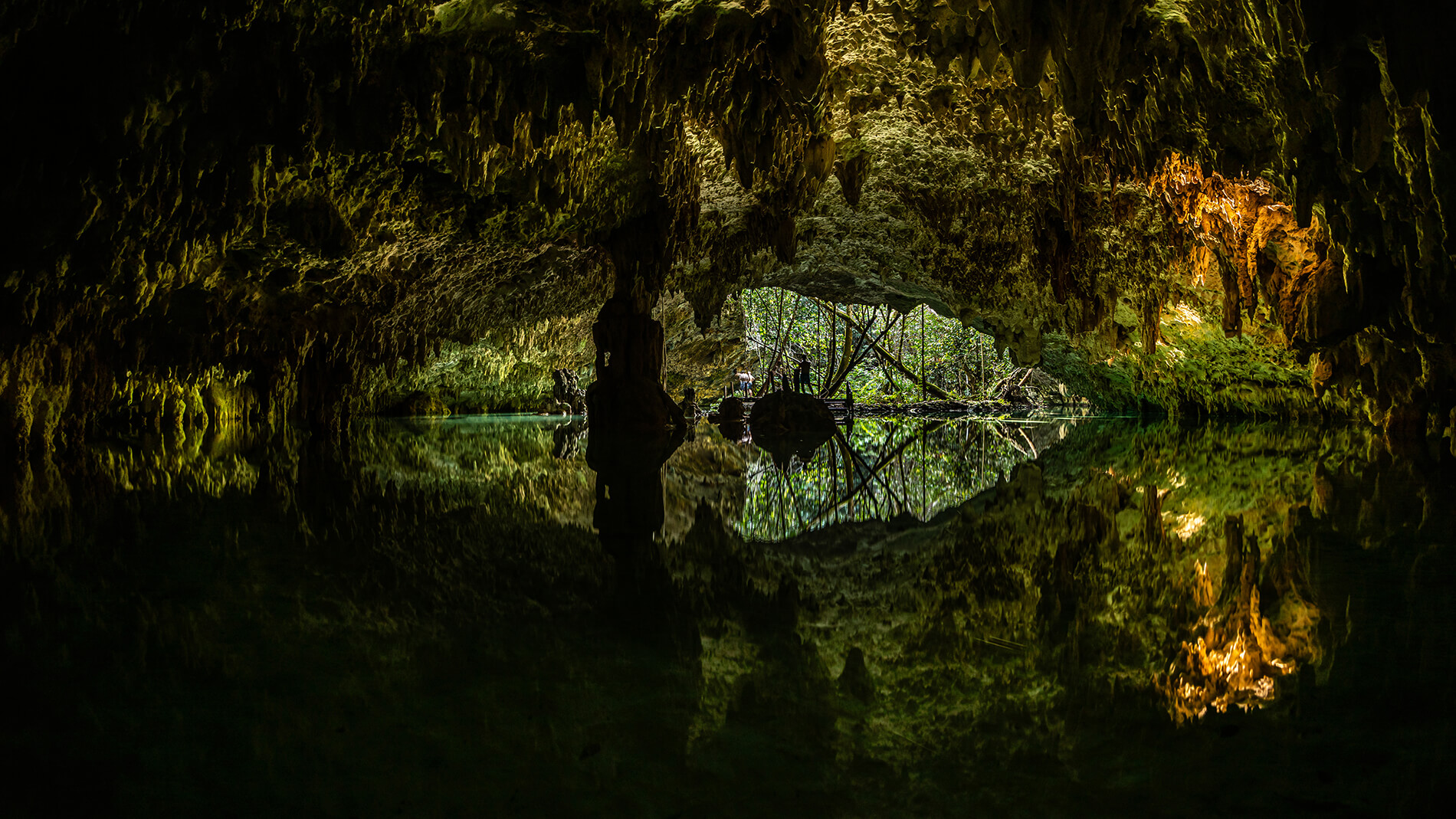 The Yucatan: Beyond the Foam Party, Yoga Retreat, and Beach Blanket

Ted Cruz’s latest trip to the Yucatan provoked a bit of nostalgia in me. It was not for good governance or common sense (nostalgia, of course, suggests a longing for something past), but for a Yucatan, I had the good fortune to encounter on very different terms than the two prevailing Cancun vacation categories. The sedate beach holiday (al la Ted Cruz absconding during an unprecedented ecological catastrophe) being one and the Jose Cuervo-fueled “Senor Frogs” spring-break bender that many Americans have experienced as a sort of heady coming-of-age difficult-to-recall foamy romp. 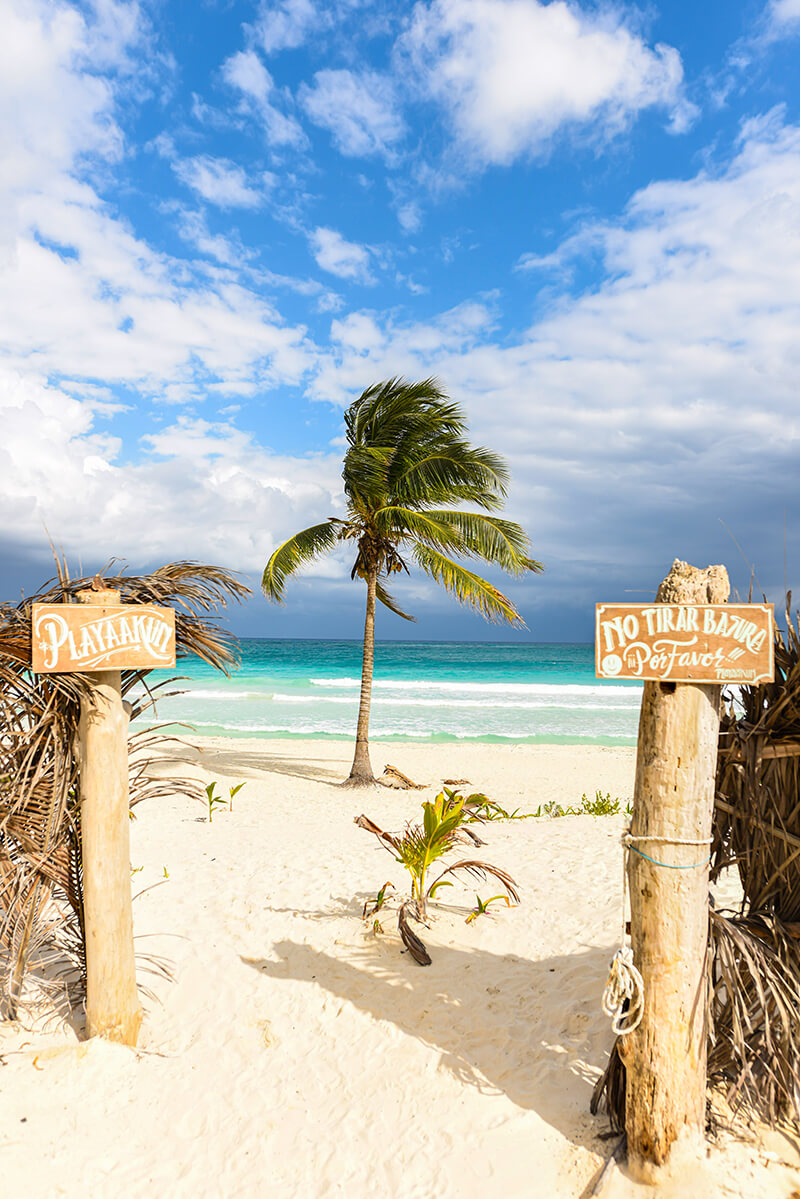 A view of the Playaakun beach just inside the perimeter of the Sian Ka’an Wildlife Refuge. The sign says, “no littering, please.” A bit of an irony considering the next image (also at Playaakun) of workers shoveling a pit for the disposal of plastic debris. 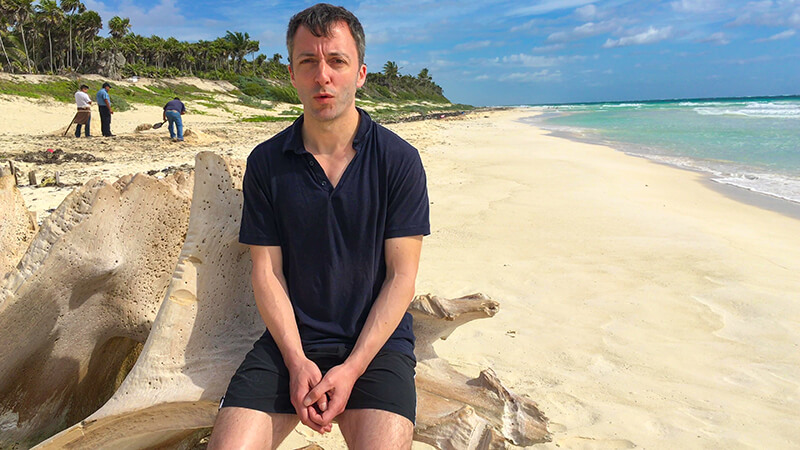 Workers digging a pit for the disposal of a wide variety of plastic garbage. The contiguous beach just a mile down the road is pristine, that is, the posh hotels that line this area remove all of the plastic rubbish with clockwork-like regularity.

Yucatan has much more to offer than just a beach

Unfortunately, the many treasures contained in this ecological and cultural wonder are often relegated by the “beach vacation” or “spring break” itinerary (partly as a result of its proximity to the continental US and its relatively low cost). I was in the Yucatan for about three weeks several years back. It was my first time visiting our southern neighbor, and it left an impression far removed from the plasticity of the MTV Spring Break showcase that was all the rage in the 90s. There were essential pop-culture landmarks during this didn’t-age-so-gracefully-over-time musical showcase (e.g., Notorious BIG, the Mighty Mighty Bosstones, Snoop Dogg, etc.). I’m also not dismissing the good fun of a tequila-fueled “stag” or bachelorette weekend either. Still, there is much more to the Yucatan than the 90s MTV “The Grind” and seaside beach vacations might suggest. 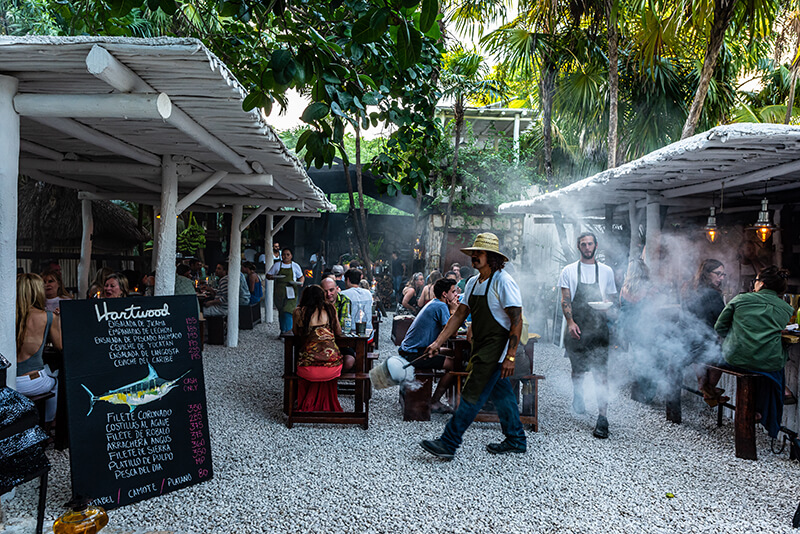 Hartwood, an alfresco restaurant in Tulum, Mexico that delivers delicious wood-fired results. It is difficult to get reservations during the high season, so plan accordingly. Smoke is wafted through the air to ward off the most pernicious tropical predator: the mosquito.

Hartwood, the beachfront restaurant in Tulum

This is Hartwood in the town of Tulum. Tulum is nestled in the Mayan state of Quintana Roo. The town itself is not remarkably old and does have an eco-lodge meets yoga-retreat-hippy-commune vibe; however, it is located in the cradle of a civilization dating back to before 2600 BCE. In fact, the only existing pre-Columbian beachfront ruin is located in Tulum’s periphery. The ruin provides glimpses of Mayan life millennia ago. Like Pompeii, the only animals permitted to inhabit the roped-off recesses are on four legs. However, instead of the Pompeiian stray dogs, Tulum contains reptilian denizens, that is, spiny-tailed iguanas. The architecture provides an ideal cityscape for the sun-worshipping Ctenosaura Similis. If the Tulum Archeological Zone doesn’t satiate your historical appetite, Coba, Muyil, and Chacchoben are all in close driving distance. 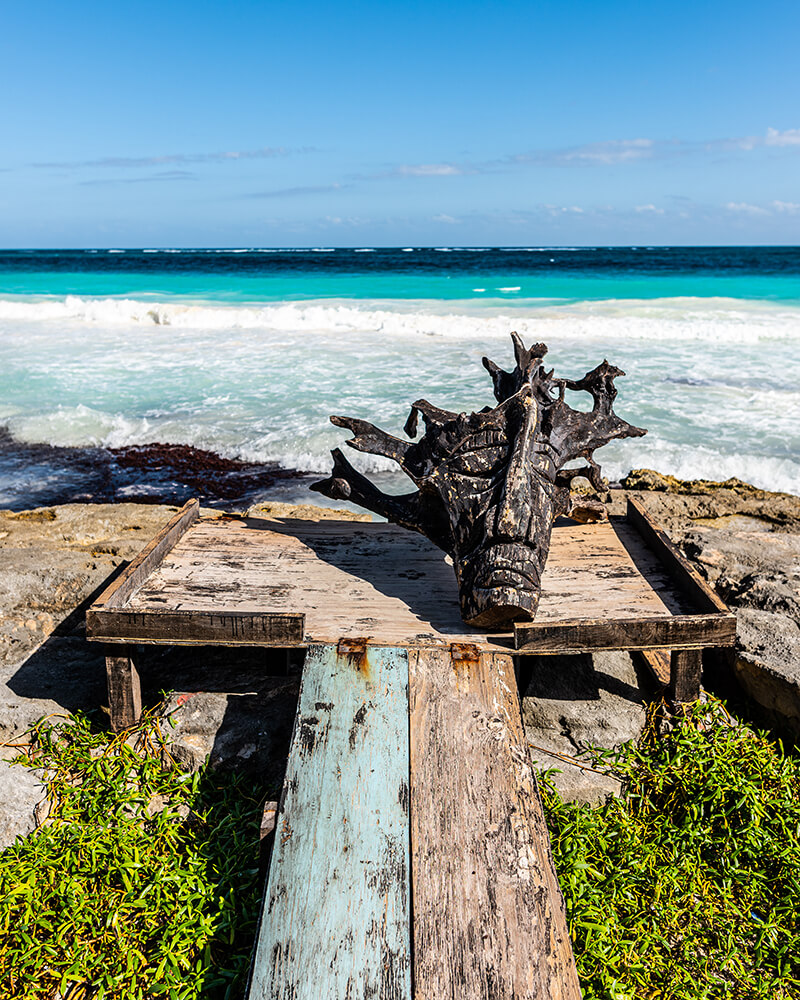 A view of the Playaakun beach

The restaurant here features local fish, meat, and produce that is very carefully and conscientiously sourced. It is also an open-air restaurant that prides itself on being entirely sustainable. While there is an air of mosquito-deterring smoke (as you can see from the image), wood-burning savouriness and a dash of hipster pretense, the food really exhibits the best of what can be locally sourced. For me, it is reminiscent of the Brooklyn pour-over coffee shops and artisanal eateries that, while a tad pompous, always seemed to deliver superb results. Not surprisingly, both of the proprietors relocated from Brooklyn in 2009. 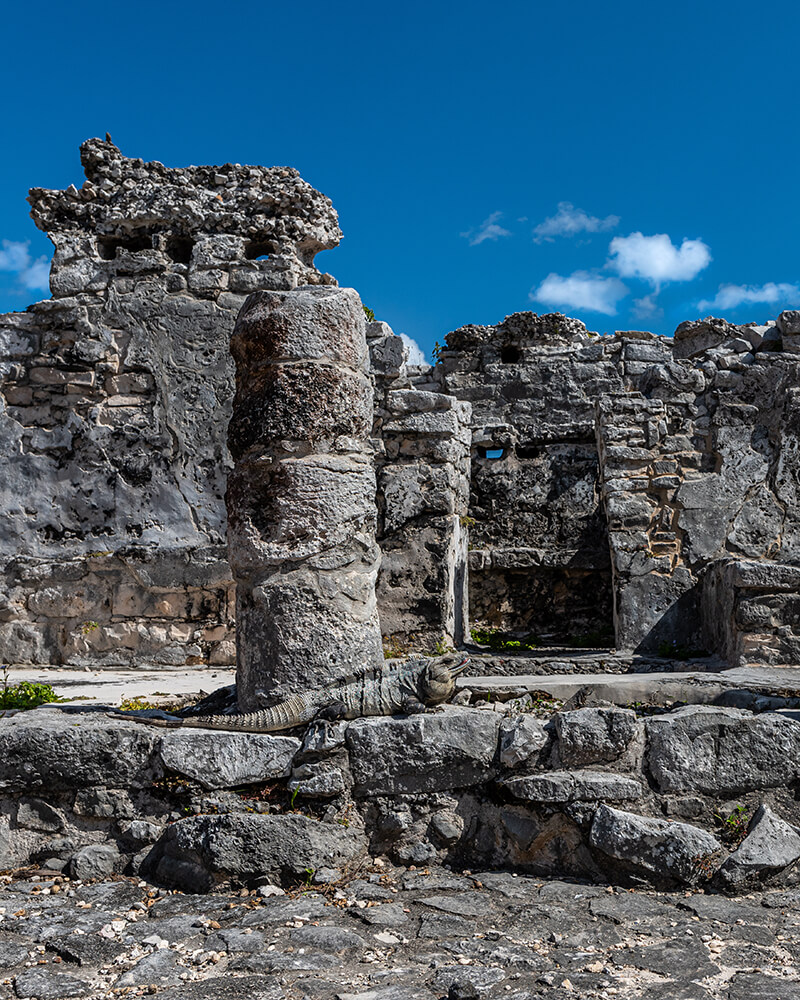 A spiny-tailed iguana basks discretely at the Tulum Archeological Site.

The ecological sites in this area are also not to be missed. The Yucatan is one of the most geologically exciting regions on the planet. Limestone sinkholes (or cenotes) create freshwater subterranean highways that go from scores of miles inland all the way to the Caribbean Sea. These can be explored with diving equipment and provide some of the most sublime limestone formations you are likely to see on the planet. Additionally, the Sa’an Caan Biosphere Reserve, a UNESCO World Heritage Site just south of Tulum, features howler monkeys, crocodiles, flamingoes, magnificent frigatebirds, ocelots, and many other charismatic creatures. 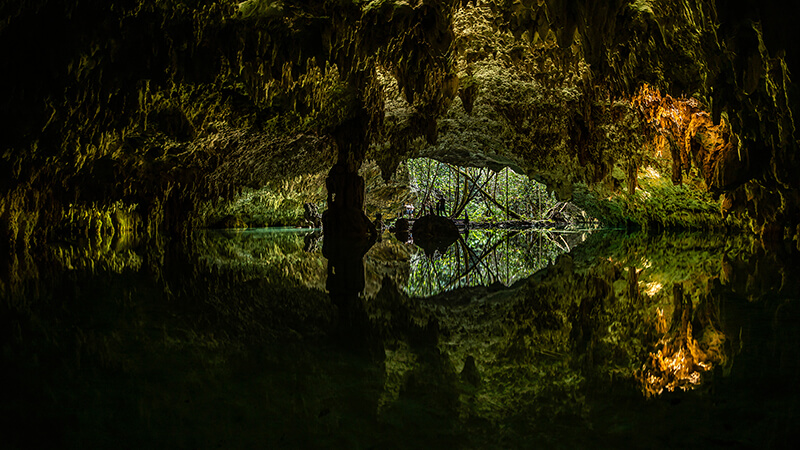 Entrance to the Sistema Sac Actun cenote, which connects with Sistema Dos Ojos. The Discovery of a connection between the two networks in 2008 established it as the longest known underwater cave system.

So next time you visit the Yucatan, remember, the foam party and idyllic beachscape, while appealing, is not nearly all this unique tropical haven has to offer.