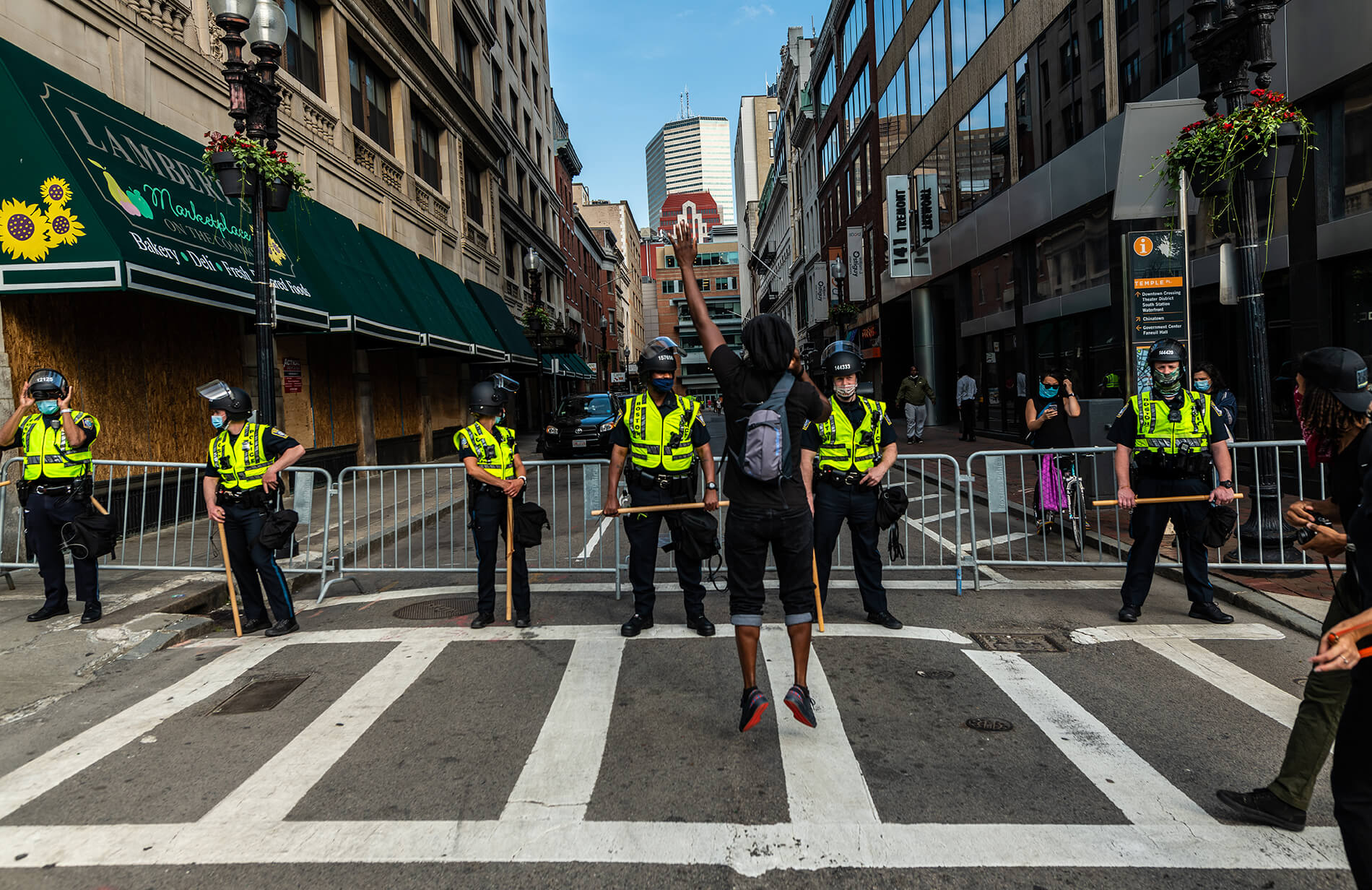 A Far Cry from Abbey Road

This area is not unlike St. John’s Wood, that is, the quant leafy location on the iconic Abbey Road Beatle’s album cover. Taken opposite the Boston Common during a BLM protest, the sizable police and military contingent cordoned off a commercial area in the Downtown Crossing neighborhood. 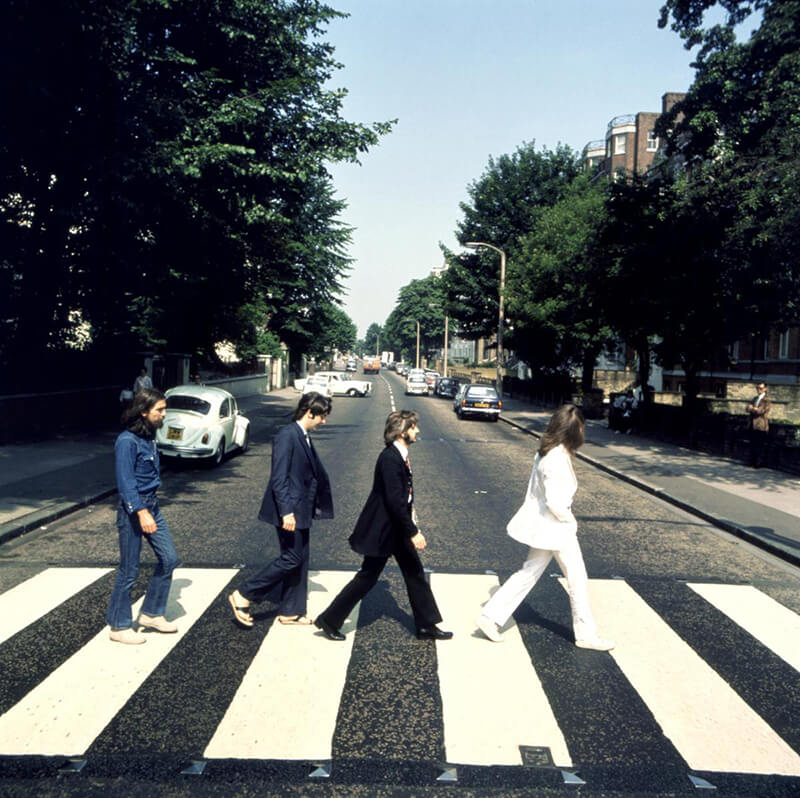 To my back is the Boston Common, a location initially used for colonial livestock fodder. St. John’s Wood is also renowned for its sweeping green spaces, including, but not limited to, Regent’s Park and Primrose Hill. Of course, Beacon Hill, also to my back, is a historical neighborhood where many of Boston’s power brokers live and circulate (the state capital building, the Massachusetts seat of power, sits atop the hill like a golden bulwark). Similarly, Primrose Hill is the watering hole for London’s minted elites. Rihanna sold her stucco villa on St. John’s Park in September for a cool £32 million. At 6,332 square feet, that’s about $7,000 per square foot, admittedly more expensive than anywhere in Boston. 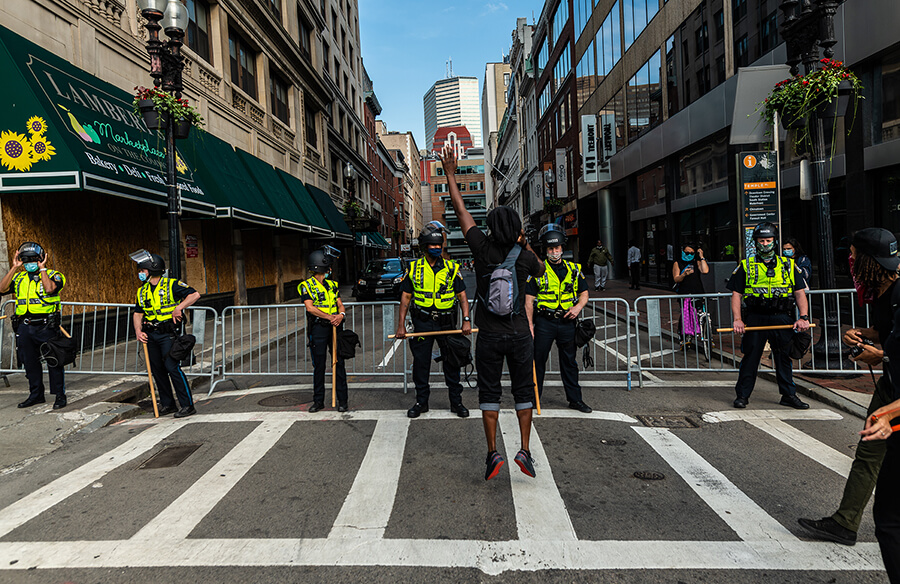 As the global pandemic ebbs, it will be interesting to see where the real estate tides will take humanity, but what is increasingly certain is that the rapidly changing climate will have some cascading consequences for our society. The Institute for Economics and Peace (IEP), a Sydney-based global thinktank, predicts that up to 1.2 billion people will be displaced due to climate change by 2050. The countries at greatest risk according to IEP, including “Nigeria, Angola, Burkina Faso and Uganda”, also happen to be mostly black and brown. The necessary flow of refugees from sub-Saharan Africa, the Middle East, and South Asia to more habitable regions in the EU will result in an environment primed for demagoguery and nationalism. Of course, this same principle applies to the US’ southern border. As my uncle says, it is no accident that the social welfare state was a cornerstone of post-WWII reconstruction in the European Union. It is largely what has prevented parties like the Freedom Party of Austria (aka, the Freiheitliche Partei Österreichs) from tallying a critical mass of voters. It is an interesting juxtaposition with the US, where much of the language coming from the right-wing media (e.g., Tucker Carlson) has taken to increasingly unabashed racial harangues.

Racism and the racial narrative in mainstream right media

As John Oliver chronicles very cogently, Tucker Carlson’s show has even become a trusted resource for white supremacist talking points, including this not-so-subtle segment, “How exactly is ‘diversity’ our ‘strength’” and” ‘Level the Playing Field’ Means Killing People’.” The latter segment claims that CDC “ideologues” that “worship money, power, and wokeness” have come to a conclusion that “old people are too white to save”.

There is quite a lot to unpack there, so let’s take it from the top. Non-Hispanic Black people and Hispanic/Latino people are hospitalized at 4.7 times the rate due to COVID-19 than their white counterparts. There aren’t any prevailing genetic factors that seem to relate to this increased hospitalization. The “ideologues” or epidemiologists (as they are professionally called) have documented a clear relationship between comorbidities, hospitalization for COVID-19, and death. As it turns out, people in the non-white cohort are more likely to be poor, chronically uninsured and underinsured, and more likely to suffer from type-two diabetes, obesity, and hypertension. The CDC is making an earnest effort to determine how they can distribute the vaccine to those that need it most, some of whom are high risk but not exactly elderly. A 55-year-old diabetic with hypertension living in Central Falls, RI is much more likely to die from COVID-19 than, say, my 72-year-old white father, who exercises regularly and lives in a Boston suburb.

It is also very curious how Mr. Carlson conflates “money, power, and wokeness.” If you look at the progressive agenda taking hold, it is clear that the stimulus is as likely to help poor whites in the rust belt as it is to help poor black and brown people. Tucker, why is it that Bernie Sanders’s message resonated with so many Trump voters? Why is it that 54% of Republicans either support the COVID stimulus package or say it isn’t large enough? Could it be that Trump voters are as miffed about the distribution of wealth and power in this country as progressive liberals are? Of course, Mr. Carlson is not offering concrete policy prescriptions, he is offering, albeit indirectly, rhetorical red meat that has been served up to poor whites for generations. As James Baldwin once very succinctly put it to William F. Buckley:

“No matter what disaster overtakes them, they have one enormous knowledge and consolation which is like a heavenly revelation: at least they are not black. Now I suggest that of all the terrible things that can happen to a human being, that is one of the worst. I suggest that what has happened to white southerners is in some ways, after all, much worse than what has happened to Negroes there.”

Baldwin hinted that this “consolation” story, this racial narrative of white superiority, is as effective and timeless as it is nihilistic. To put that in more contemporary terms, no matter how desperate the lot in life may be for the average white Trump voter, there is always a relief in this white mythology. Tucker Carlson’s show is a master class in how this message has been modernized. He wouldn’t use some of the outmoded racist language employed by the late William F. Buckley. No, his program is like an advanced placement nouveau-bigotry seminar. It affords the viewer (and the host) the succor of the racist diatribe, with a verbal veneer of deniability. It is as modern as the political non-apology al la Andrew Cuomo. Here is one of the better examples:

“I’m for getting along. I’m for colorblindness. I’m for tolerance 100%. But I also think that if things radically change in your country, it is ok for you to say, ‘What is this? And maybe I don’t want to live in a country that looks nothing like the country I grew up in.’ Is that bigoted?”

This is quite a feat of vernacular gymnastics. He prefaces his statement with cliches suggesting equanimity (sort of like a hedge against what he is really saying). He then launches into the main body of the argument, which is that non-white immigrants coming from our southern border are making America less American because they are making it less white. You can see Mr. Carlson use this rhetorical method numerous times. It is akin to the anti-semite prefacing his racist anecdote with “I have some really good Jewish friends, however…” 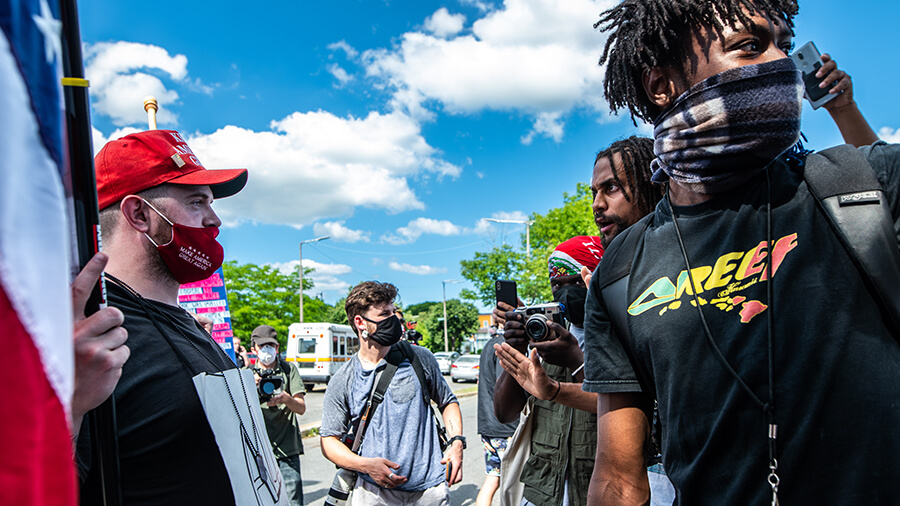 A Trump supporter clashes with a Juneteenth attendee at a Dorchester celebration commemorating the holiday.

A full-blown racist and nativistic regime, Nazi Germany being the archetypal example, does not happen overnight. As Mussolini famously quipped, “If you pluck a chicken one feather at a time, nobody notices.” Donald Trump has done this with great efficacy over the last four years. How many times did you hear his conduct or speech be described as “unprecedented” by the media? This softening of norms not only applies to race and ethnicity; it applies to economic realities. To add fuel to this tinder box, we also live more economically segregated lives than ever before. Traveling to Mumbai several years ago was revelatory in one very striking way: the proximity (and visibility) of the poor to the rich. Shabby corrugated metal shanties would lie in the shadows of some of the more luxurious high-rise buildings. In other words, it is near impossible to not see poverty and degradation in Mumbai. However, if you happen to live in some of the more exclusive US zip codes, it is much easier to cordon yourself off from the bleak reality that is the life of America’s poor.

As Baldwin succinctly put it, segregation means “that you don’t know what’s happening on the other side of the world because you don’t want to know.” This “apathy and ignorance,” as Baldwin describes it, does not just apply to race, gender, and sexuality; it also applies to matters of wealth inequality. Chrissy Teigen’s Twitter faux pas in which she asked her followers, “what’s the most expensive thing you’ve eaten that you thought sucked?” provides some illumination. This was her not-so-relatable anecdote:

“one time, John and I were at a restaurant and the waiter recommended a nice Cabernet. We got the bill and it was 13,000 dollars. HOW DO U CASUALLY RECOMMEND THAT WINE. we didn’t even finish it, and it had been cleared!!!”

It is not coincidental that these stories are percolating right now; after all, inequalities have been compounded by a pandemic that has penalized brick and mortar “essential workers” (who in most cases can not afford supplemental child care) while simultaneously rewarding companies (like Amazon), that are doubling down on scaling, automation, and work-from-home practices. The result: a growing economic, educational, and lifestyle divide. And unfortunately, this necessarily results in gestures and behaviors that are incredulous as they are comically ignorant.

The Gal Gadot “Imagine” celebrity zoom-karaoke cover was another hilariously tone-deaf example. As was David Geffin’s Instagram post “hoping everyone is staying safe” coupled with an image of his $590 million megayacht. That isn’t even accounting for the numerous celebrity PSAs and posts assuring American’s that we are “all in this together.” Maybe these gestures are consoling to some, but it does not make it any easier to pay for rent, afford Consolidated Omnibus Budget Reconciliation Act (COBRA) insurance payments, fill the gas tank, or alleviate the debt burden ($90,460 for the average American) that makes treading water an economic reality for so many Americans. That is not to say these acts are malicious (I don’t know the aforementioned people, and they might be lovely people). Still, they do exhibit an empathy gap that is as staggering as the inequality that undergirds it.

COVID Stimulus Relief won’t change the US climate of inequality

Just to circle back to the conversation I had with my uncle, there will always be a certain proportion of the population seduced by racially tinged demagoguery and conspiratorial thinking—the Freedom Party won some 17% of Austria’s parliamentary seats. However, the economic mechanisms that make life much more tolerable for the middle class (universal health care, childcare, and higher education) do not just make economic sense in terms of having a stable, educated, and healthy electorate; they also innoculate the population from the kind of extremism, demagoguery, and frankly completely implausible conspiracy theories that are leaching into mainstream political discourse in the United States.

The $1.9 trillion stimulus COVID relief bill is a productive start. Still, if we are to live in a habitable political and social environment, we will need to do much, much better. If the IEP projection that 1.2 billion people, many of whom are black and brown, will be displaced by climate change, conditions will be ripe for white supremacist lebensraum rhetoric to resonate. If we underestimate the confluence of income inequality and climate migration, we will be at great risk of falling into the hands of an even wilier demagogue than the former president.