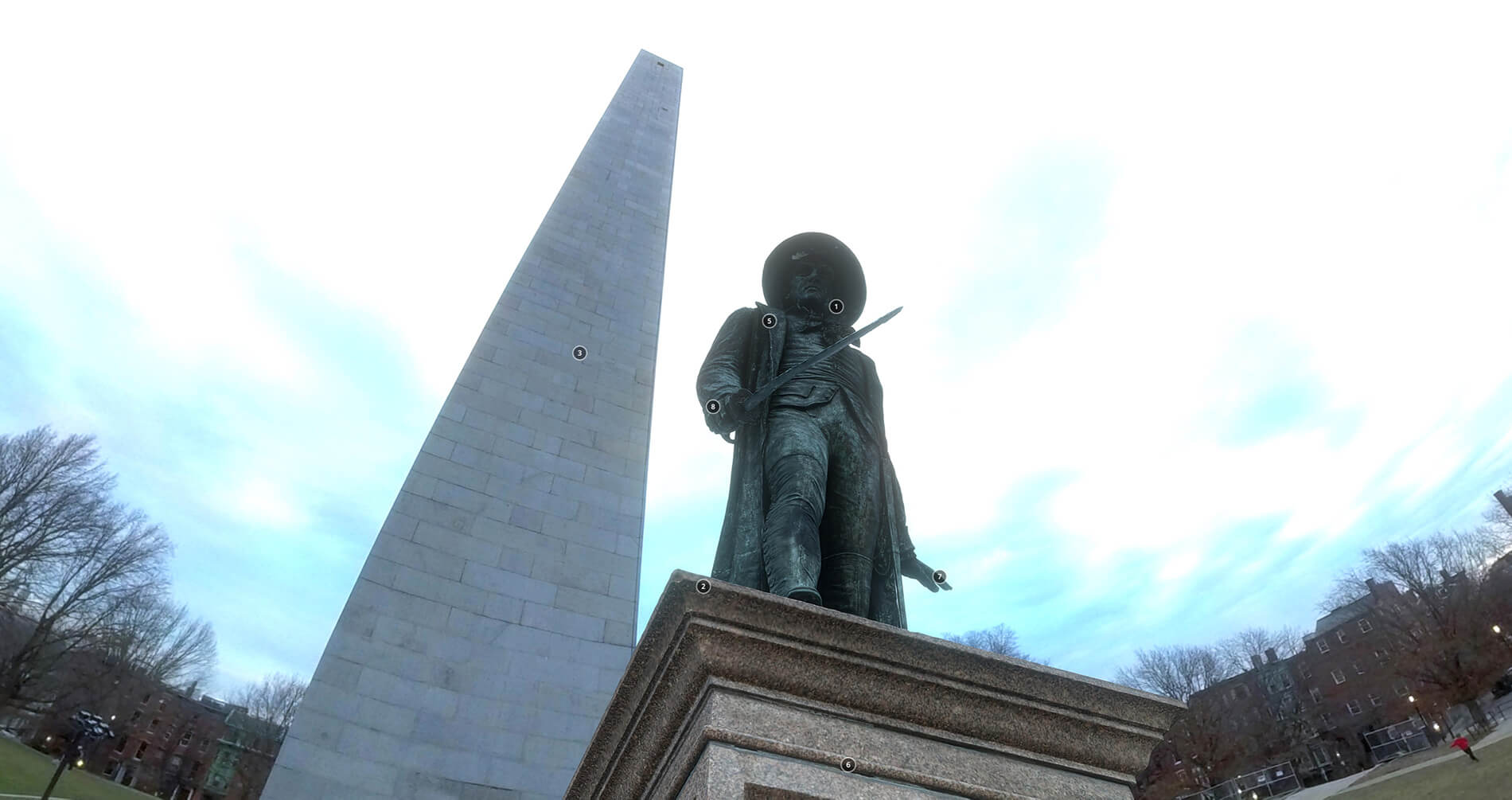 The Bunker Hill Monument by Specterras on Sketchfab

We humans, tend to embellish, exaggerate, and even conjure up stories out of whole cloth. Trusting an autobiography, a CV, or tales of former glory on the football field or classroom is a bit naive. Legends are often the result of embellishments. To use a contemporary example, Kim Jon Un is allegedly able to control the weather, cure diseases, and according to the Korean Central News Agency, “reconfirmed a lair of the unicorn rode by King Tongmyong, founder of the Koguryo Kingdom.” His father, Kim Jong Il, a man of numerous talents, was reported to have concluded his first 18-hole championship golf course with a staggering 11 holes-in-one and a record-setting 38 under par. He was also reported not having the bodily need to pee and poop. I always get a good chuckle from propaganda. Still, it speaks to what can happen (in an extreme scenario) if a society does not have mechanisms to account for what is true, even if the truth is inconvenient, uncomfortable, even dangerous.

Dave Chappelle’s Instincts about the Past

Much of history as we understand it is a collection of stories, some accurate and anodyne, some laughably ridiculous, but others are somewhere in the middle, and these tales are often the most dangerous. At first glance, stories like George Washington and the cherry tree or Isaac Newton and falling fruit seem pretty innocuous. And why shouldn’t they? One involves a political hero, the other, a scientific one. And fruit (forbidden or secular) always seems to be the sweet menu item that imprints best on the brain. The problem with these stories is that they elevate the participants into something more suggestive of the Marvel or DC comics universe and less reminiscent of what it means to be a flawed and fallible human. It is also why political memoirs and autobiographies should not be trusted. You’re asking a person with a gigantic ego to tell the unvarnished truth about their life. If you believe what they’re telling you, I’m selling a timeshare in Florida that is a dynamite deal. Dave Chappelle pointed to the problem of accounting for the past in a now-legendary sketch appropriately called, “The Dave Chappelle Story.”

Stories of remarkable acts of courage, conquest, and cunning do make things more interesting, especially when you decide that the truth is interesting enough. The story of George Washington and the cherry tree goes that a six-year-old George received a hatchet from his dad. He proceeds to cut down a cherry tree with the hatchet while his father is busy working on the plantation. His father returns home and asks what happened to the cherry tree. George replies, “I cannot tell a lie…I did cut it with my hatchet.” Instead of punishing him, George’s dad rejoices at the virtue of his precocious son. We repeat folk stories like these so often they become part of our collective storybook. Most American boys and girls (whether Democrat or Republican) grow up with varying degrees of reverence for our saint-like secular figures. It becomes easy to forget that many of them were just as petty, immoral, and selfish as people living today. To use one example, Thomas Jefferson was the owner of over 600 slaves during his lifetime. He also fathered a child with a slave-girl in her teens, Sally Hemmings, in his 40s. By today’s standards, that would be considered rape and make for one very unpleasant biopic. Sure, the historical context may have been different, and people might say, “He was a man of his time”, but I don’t buy that basket of goods.

What is entertaining is indeed memorable

The Bunker Hill Monument is a monument that might be one of colonial America’s most misunderstood sites. You would be reasonable to assume that this heroic statue and soaring phallic-like obelisk would be a memorial to a rout or victorious war effort, but you would be wrong. The battle of Bunker Hill was won convincingly by the British. And that isn’t the only tricky bit of the story to consider. The hill on which this memorial (and the battle that ensued here) sits is not, as it were, “Bunker Hill.” This hillock is called Breed’s Hill. Bunker Hill is another prominence about 600 yards from this location, memorialized by a Whole Foods Market, Core Power Yoga, and Quality Dental. It is not immediately clear why Ben Afleck cast Charlestown (this neighborhood) as a hard-scrabble working-class neighborhood in The Towne. I remember wondering, “Where are all the hipsters, young upwardly-mobile professionals, and aspiring triathletes?” It was particularly ridiculous because I couldn’t afford to live there at the time of its release. Hollywood and hagiographers expertly spin stories to be more inspiring, coherent, and easy to tell. And what is entertaining is indeed memorable.

Memorials like the site at Bunker Hill might seem like relics of a past with little relevance to the present, but monuments of men and stories of cherry trees are the flour and water that make up our national origin comic book. The framers were keenly aware of creating a compelling tale of heroes and villains, even if they took some “based-on-a-true-story” creative liberties. The most notable story told of the siege of “Bunker Hill”, by a “biographer” named Parson Weems, claimed that William Prescott (the Colonel memorialized in the bronze statue 3D modeled) told his men in the heat of battle, “Don’t fire until you see the whites of their eyes.” The rationale is that the outnumbered and poorly equipped Minutemen needed to conserve what little ammunition they had against a formidable British front. Unsurprisingly, Parson Weems is the same man who wrote eloquently of a young George Washington and his cherry tree.

Historians now believe that Colonel Prescott (or more likely one of his officers) said something like, “Don’t fire until you see the white of their splash guards”. I know, it isn’t all that quotable, but Boston was a sprawling tidal bog at the time, and some gaiters (or splash guards) would have been necessary. Mr. Weems’ embellishment, in this case, was a way of adding a bit of dramatic heroism to a story about the first significant loss in the Revolutionary War.

The past is never dead. It’s not even past.

The battle over our national narrative does not begin and end with men in tricorn hats. And it is not only about the past; it is about our appetite for the often grimy truth, how to reckon with that truth, and the best way to move forward as a society. Last week, the Tennesee School Board banned the graphic novel “Maus” for “rough, objectionable language” and the nudity of a cartoon mouse. The “Maus” ruling, based on a Tennessee law passed in May, stated that the school curriculum may not make students feel “discomfort, guilt [or] anguish” over course material”. Recent efforts to quash classroom discussions about historical and institutional racial bias in the US motivated the legislation. Critical race theory is the latest in the battle over why the truth matters, even if it isn’t the most flattering or consistent with our secular heroes. As William Faulkner so eloquently said, “The past is never dead. It’s not even past.”