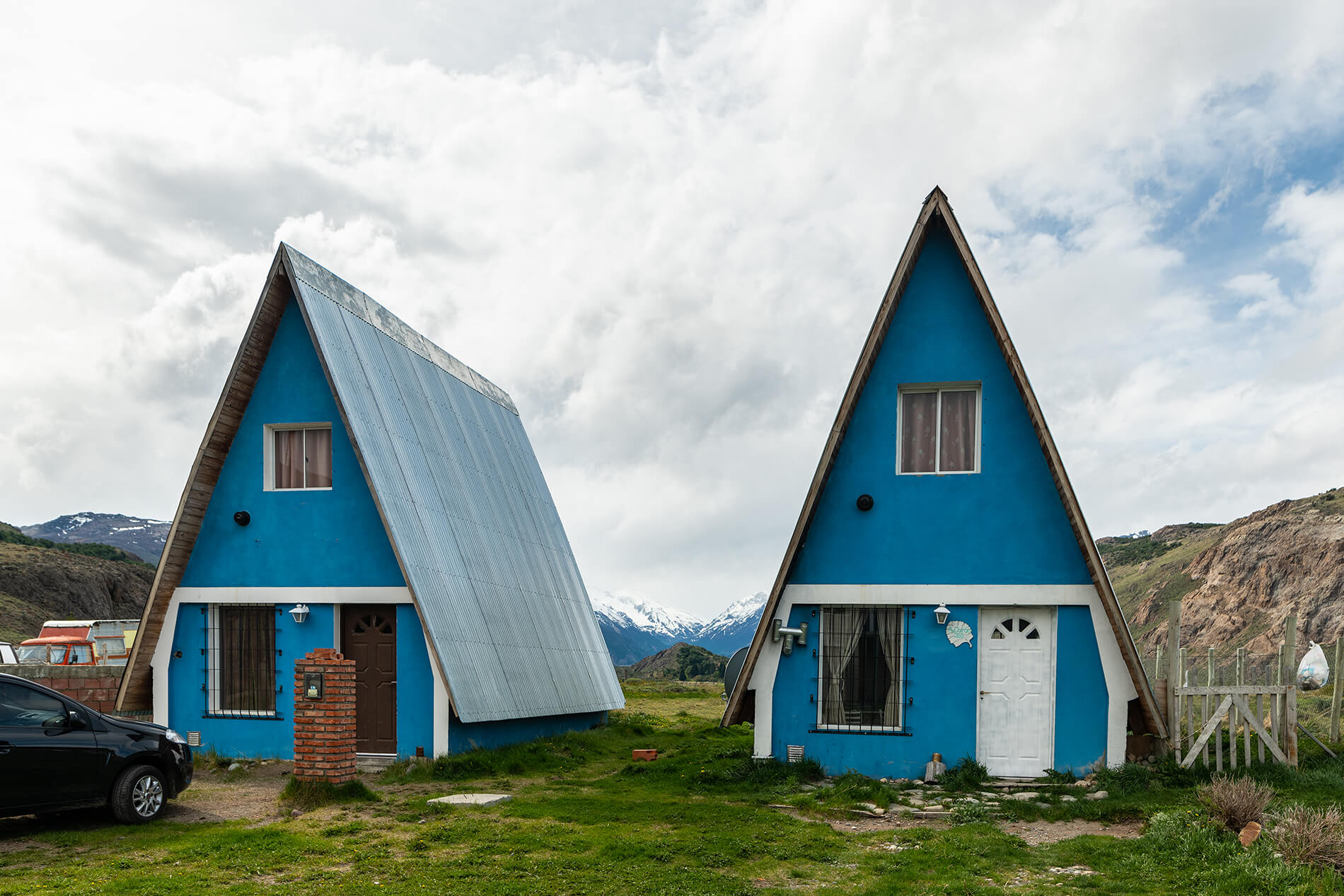 “In Patagonia, the isolation makes it easy to exaggerate the person you are: the drinker drinks; the devout prays; the lonely grows lonelier, sometimes fatally.”

Bruce Chatwin, mystagogue of punchy travel writing, had a life-long interest in this remote end-of-the-world peninsular landmass. His fascination started as a young public school pom. Chatwin’s grandmother had a curiosities cabinet containing a leathery chunk of “brontosaurus hide”, allegedly from Argentina. Though an apocryphal story, this artifact aroused a firey fascination with the remote South American peninsula, climaxing in Charwin’s seminal work, In Patagonia.

The experience of hiking Patagonia

El Chalten, a frontier town tethered to the edge of Los Glaciares National Park, is the best access point for trekking in Argentine Patagonia. While the A-frame houses cling to the earth like their similarly-shaped geological parents, the Andes range; modern conveniences, like wifi, international cellular service, and a diverse array of eateries, dilute some of the heaviness that makes the drinker want to drink and the restless wish to wander. It is the type of environment where one feels inclined to keep on moving. Incidentally, I haven’t tacked on more mileage in one month than my time in Patagonia. Part of that was the job’s function, including treks to Laguna Sucia with 30-50 pounds of gear and camera paraphernalia on my back every other day. But it must be said, Patagonia is a place that (with sufficient time) will lay bare some harsh (at least for some) truths, hence the tendency to hit the booze. 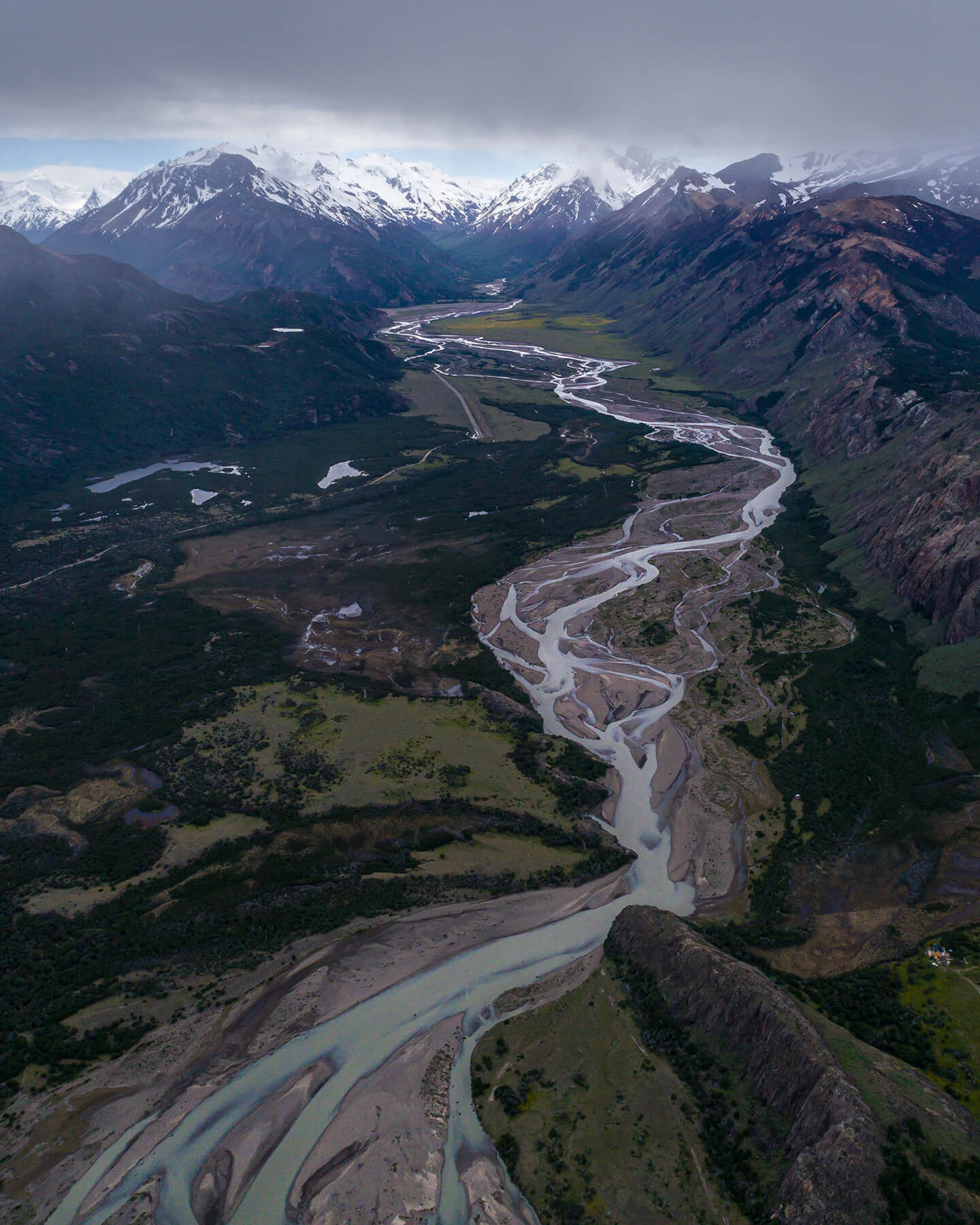 A 10,000-foot view of the Andes range draining into the Las Vueltas River.

The beauty of such ecological grandeur is, on the one hand, revelatory, but on the other, instantaneously humbling. No matter how important or indispensable you think you might be, this landscape tends to unequivocally say, “Silly human, a millennium is but the passing of a few hours in my 4.54 billion years. I hosted the Sauropods–the largest terrestrial animal to walk on my rounded spine–some 100 million years ago. What will I know of you in 100 million years?” I can see how this might be unsettling to some, but for me, it was a confirmation of the sum being much more significant than its constituent parts. Humanity is but a small constituent part of a much larger organism, our natural world. Maybe this is somewhat inconsistent with American individualism. Still, as George Carlin once wryly observed:

“The planet isn’t going anywhere, we are…and we won’t leave much of a trace, maybe styrofoam…the planet will be here a long, long, loooong time after we’re gone, and it will heal itself, it will cleanse itself, ’cause that’s what it does, it’s a self-correcting system. The air and water will recover, the earth will be renewed, and if it’s true that plastic is not degradable, well the planet will simply incorporate plastic into a new paradigm: the earth plus plastic.”

George Carlin was a bit suspicious of human motivations–comedians almost have to be. Still, his overriding rhetorical point that “We haven’t even learned to care for each other, we’re gonna save the planet?!” was aimed at both conservatives and liberals alike. Carlin was not a climate change denier, nor was he fatalistic about the planet’s fate; however, he had little tolerance for the hypocrisy and arrogance of earth’s cleverest ape. In his monologue, Carlin says piercingly,

“These white bourgeois liberals who think that the only thing that’s wrong with this country is that there aren’t enough bicycle paths. People trying to make the world safe for their Volvo’s. Besides, ‘environmentalists’ don’t give a shi* about the planet; they don’t care about the planet. Not in the abstract they don’t. You know what they’re interested in? A clean place to live. Their own habitat. They’re worried that someday in the future, they might be personally inconvenienced. Narrow unenlightened self-interest doesn’t impress me!”

I wonder what Carlin would think about Bill Gates’ latest book, How to Avoid Climate Disaster. I’m being a bit hyperbolic, Carlin is dead after all, but I imagine he would say something like, “Do you know how we avoid climate disaster? Don’t live like Bill Gates! After all, he lives in a 66,000 square foot bourgeois monstrosity and spews jet fuel from his private Gulfstream while crisscrossing the planet he plans on saving.” He would probably be equally miffed about the hypocrisy of the Tesla-driving liberal. Particularly the wealth required to own one, the reliance on consumerism to solve environmental problems, and the little appreciated and publicized court case charging Tesla with facilitating child labor, inhumane working conditions, and “the complicity in the injuries and deaths” of children. Tesla is one of the subjects (along with Apple, Microsoft, Google, and Dell) of a landmark class-action lawsuit in which Congolese plaintiffs are claiming that these companies are “liable for forced labour under US federal law, which they allege took place at some of the biggest industrial cobalt sites in the Congo – Mashamba East, Lake Malo B-5, Commus and Tilwizembe.” You can read a harrowing first-hand account of the conditions on the ground here.

Typical Patagonian A-frame homes. These homes are designed to withstand the punishing wind and inclement weather so characteristic of Patagonia.

Carlin’s observations can be difficult to stomach for some, but it is because they contain the acid tonic that we call the truth. Like Carlin, Patagonia looms performatively like an agitated comedian. Given time, its imposing geological form cuts deep through pettiness and vanity like magma through the ice.